If you saw my review of The Birds, the Bees, and You and Me you’ll know that I loved Hinebaugh’s book. It is one of the books I would have loved to read as a teen as it is so sex positive! I reached out to Olivia and so voila! This guest post!

Why Realistic Sex in YA is so important to me personally

an introspective blog post by Olivia Hinebaugh, author of The Birds, the Bees, and You and Me. 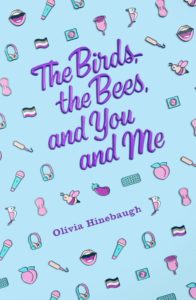 If you had told me at sixteen, that I would write a book for young adults about sex, I would have been incredulous. At sixteen, I had absolutely no firsthand experience. I had never been kissed. I had never had a boyfriend. In fact, I had already decided I just must not be “dateable.” (Which, like, WTF does that even mean?) I was curious about sex, but I was also not all that interested in experiencing it. I was definitely not any rush. If anything, I was still sort of weirded out by the idea of ever being that comfortable with another person.

Now, I think that there were two factors to me being “weirded out.” The first was the sort of “slippery slope” narrative. You’re probably familiar with this story. It goes something like this: You’re wildly attracted to someone. If that person goes in for a kiss, you won’t be able to resist. And that’s just a slippery slope until you’re suddenly naked and touching each other and–oops!–sex happens. Like as if you were tumbling down a hill and you have absolutely no say in which direction you’re rolling and gravity is gonna win, so just by being on this “slippery slope” you were making the decision to go all the way down. 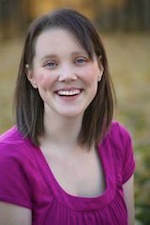 The second is the “all or nothing” story. It’s similar to the slippery slope, in that, there’s this idea that you are either having sex or you’re not. And by “sex” I mean heterosexual sex between two cisgender people. (eyeroll. Of course that’s all I ever learned about.) It’s that whole concept of virginity. Like once you have sex, something switches and you are suddenly a wiser, more grown-up, and–in the case of girls–sluttier. Like you’re somehow a new person and that having intercourse changes you. In reality, sexuality isn’t an on/off switch. And having heterosexual intercourse isn’t the only destination on the road of sexual experiences. In reality. There are a lot of firsts. First romantic crush. First kiss. First orgasm. First major sexual attraction. First time having intercourse. First time getting some “over the bra” action. First time getting naked with someone else. And all those stops from fully clothed to fully naked. And all the kinds of kissing. And all the kinds of sex. And all the kinds of attraction: romantic, platonic, sexual.

One of the reasons I never thought about those other destinations is because in so much of the media I was consuming, intercourse was normally right after the characters first acknowledge attraction, then kiss, then immediately they jump into the sack where they “do it.” They start down that slippery slope.

When I was a teenager, I would have loved that validation. Like, hey, one day you’re going to really like someone as a close friend, and then you’ll try out kissing them and realize that it isn’t a slippery slope, you didn’t lose yourself to the moment. You did what you wanted with someone who respects your boundaries.

One of the things I’m proud of in my debut book The Birds, The Bees, and You and Me, is that the characters talk about and experience all kinds of things aside from “all or nothing.” And the characters (especially the girl characters) have agency. They know what they’re comfortable with and what they desire. Nothing happens without enthusiastic consent from all parties. I don’t mean for the book to be didactic, although, I learned a bunch of stuff researching it. But I’m thrilled that I get to add a story to the world that doesn’t involve two characters inevitably smashing together in fits of passion. Like the more diverse stories about all kinds of relationships and sexualities the better. Teen me would have appreciated it.

Find The Birds, The Bees, and You and Me on Goodreads, Amazon, Indiebound & The Book Depository.

Seventeen-year-old Lacey Burke is the last person on the planet who should be doling out sex advice. For starters, she’s never even kissed anyone, and she hates breaking the rules. Up until now, she’s been a straight-A music geek that no one even notices. All she cares about is jamming out with her best friends, Theo and Evita.

But then everything changes.

When Lacey sees first-hand how much damage the abstinence-only sex-ed curriculum of her school can do, she decides to take a stand and starts doling out wisdom and contraception to anyone who seeks her out in the girls’ restroom. But things with Theo become complicated quickly, and Lacey is soon not just keeping everyone else’s secrets, but hers as well.

Find The Birds, The Bees, and You and Me on Goodreads, Amazon, Indiebound & The Book Depository.

Olivia Hinebaugh loves all stripes of literature for children. When she isn’t writing fiction, she can be found writing freelance, making art, discovering new songs on spotify, texting her writing buddies, or folding laundry. She lives near Washington, D.C. with her spouse, three kids, a dog that looks like a coyote, and a one-eyed cat. The Birds, The Bees, And You And Me is her debut novel.

What is your favorite sex positive YA novel?

2 thoughts on “Guest Post: Olivia Hinebaugh “Why Realistic Sex in YA is So Important to Me Personally””