I had heard so much about Sanctuary so when I had the opportunity to jump on this blog tour, I practically vented myself into space! Reading Sanctuary was like part thriller, part mystery, and all science fiction. It was a fabulous read! Be sure to stay tuned for the giveaway!!

Alien meets Alexandra Bracken’s The Darkest Minds in this thrilling debut novel about prison-guard-in-training, Kenzie, who is taken hostage by the superpowered criminal teens of the Sanctuary space station—only to have to band together with them when the station is attacked by mysterious creatures.

Kenzie holds one truth above all: the company is everything.

As a citizen of Omnistellar Concepts, the most powerful corporation in the solar system, Kenzie has trained her entire life for one goal: to become an elite guard on Sanctuary, Omnistellar’s space prison for superpowered teens too dangerous for Earth. As a junior guard, she’s excited to prove herself to her company—and that means sacrificing anything that won’t propel her forward.

But then a routine drill goes sideways and Kenzie is taken hostage by rioting prisoners.

At first, she’s confident her commanding officer—who also happens to be her mother—will stop at nothing to secure her freedom. Yet it soon becomes clear that her mother is more concerned with sticking to Omnistellar protocol than she is with getting Kenzie out safely.

As Kenzie forms her own plan to escape, she doesn’t realize there’s a more sinister threat looming, something ancient and evil that has clawed its way into Sanctuary from the vacuum of space. And Kenzie might have to team up with her captors to survive—all while beginning to suspect there’s a darker side to the Omnistellar she knows. (Disclaimer: I received this free book from the blog tour. This has not impacted my review which is unbiased and honest.)

Whenever people in books or movies or real life say something is fool proof, or so advanced, I want to slap them in the face. Did the Titanic teach no one anything? When people are lulled into a false sense of security, that’s when things go wrong, and wrong they go. The biggest thing that kept me reading, besides the mystery, was the journey that Kenzie has to go through. Having worked as a prison guard, but basically only that, Kenzie really has to question what she thinks she knows.

What Kenzie discovers is that the system is that systems are created by people. And people are flawed. Even worse, people have prejudices, fears, and hatred. People make the rules and the protocols and they drill them into you. But what if they were wrong? In times of trouble, it isn’t how we protect our friends, but how we treat our enemies that speaks to our character. So what Sanctuary looks at, through Kenzie, is can we go beyond what we were taught? Our fears and insecurities and rigid thinking? (Cue the Doctor Who episode, “The Hungry Earth” which is not a direct parallel, but has similar ideas).

We all don’t realize it, but we’re all in different sorts of prisons. We don’t realize that we’re in cages we made ourselves (or not). But cages made of duty, family, routine, love. Not all cages are bad, but there are bars and they do stop us, protect us, from going outside. What I adored in Sanctuary were all the real questions this book asks of Kenzie and of us. How do we have a fair justice system? What would that look like? In that way, Sanctuary has some excellent world building because it introduces ideas of privilege and corporations that are though inducing.

Sanctuary is all about making choices, sacrifices, and decisions about what is the right thing to do. It’s about realizing that your sanctuary, might be another person’s prison. And what do you do about that when you see those inmates as people instead of numbers. Check out Sanctuary on Goodreads.

So without further ado, I would….
Pine over: Mia (she knows how to wield a knife so well!)
Fight a dragon with: Cage (he has a fierce heart and would protect me so well – I’d need it)
Character of heart: Rune (her tech skills and good heart are both something I don’t really have, but need)
Sleepover with: Kenzie 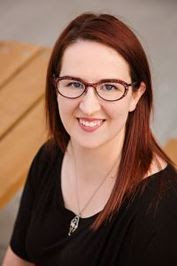 Caryn Lix has been writing since she was a teenager and delved deep into science fiction, fantasy, and the uncanny while working on her Masters in English literature. Caryn writes novels for teens and anyone else who likes a bit of the bizarre to mess up their day. When not writing, Caryn spends her time obsessively consuming other people’s stories, plotting travel adventures, and exploring artistic endeavors. She lives with her husband and a horde of surly and entitled animals in southern Alberta.

Would you ever travel to space?

One thought on “Blog Tour: Sanctuary by Caryn Lix”